Well, it's been a while since an update here on Booth's Little Farm. But today is a good update! Earlier this week, I worked on a compost bin, mostly made from the wood taken from a wooden pallet that had been thrown out. It was what I considered to be Step 1 in getting some plants in the ground. It's stationed out by my storage shed, so it's not too close to the house, but yet not so far that I am discouraged from taking scraps (egg shells, fruit and vegetable scraps, etc) out to it. It's fairly good-sized, at 49" long and 24" wide. 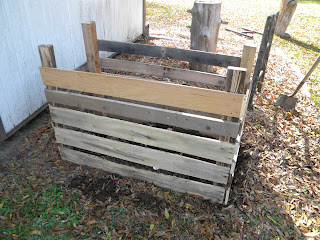 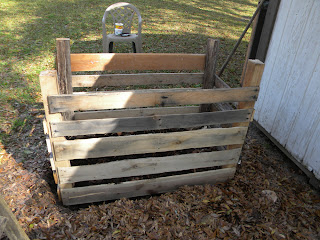 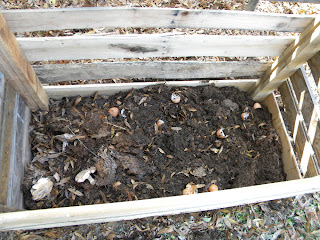 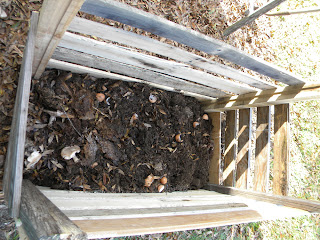 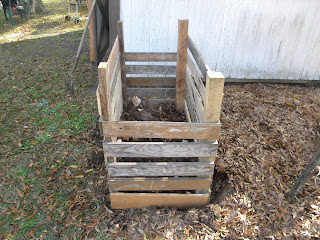 I'm quite proud of that simple little compost bin lol. And I managed to use the circular saw without losing any fingers!

So now that the compost bin is complete, I needed something to use the composted materials for. And that brings me to today's project: The raised bed garden! I started out by going to Home Depot for the cinder blocks I wanted to use as the building material for the garden bed, but they didn't have any that were squared on both sides, so I ended up going to Lowe's instead. And Lowe's had exactly what I needed! So I purchased 45 cinder blocks (my truck felt so HEAVY driving home on the interstate, and it did not seem to want to stop!), took them home, and went ahead and arranged them in the bed pattern. 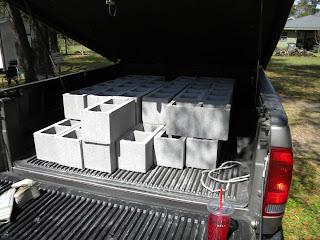 Above, you can see them loaded into the bed of my truck. The next picture shows where I planned to put the bed: 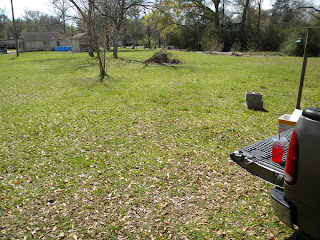 One thing I realized when I started laying out the blocks is that the ground was not exactly even and level. I ended up having to put about 3 wheelbarrow loads of dirt to try and even out the ground. Even then, I was not entirely successful, as you will be able to see when the second layer of blocks is added lol, although I did eventually fix the biggest problem in the near side. 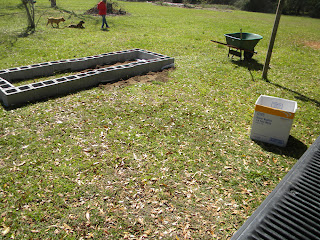 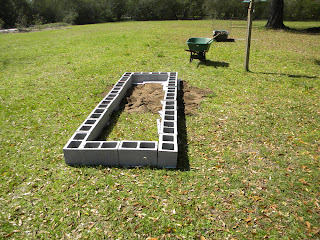 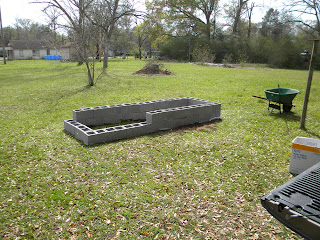 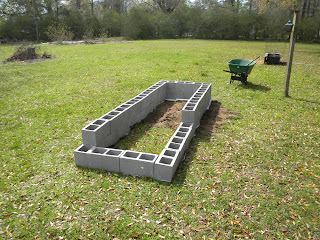 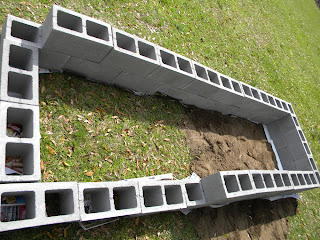 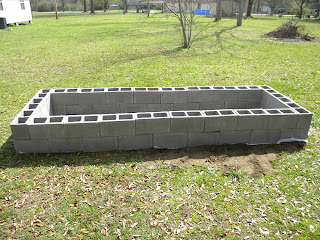 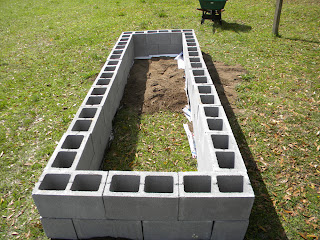 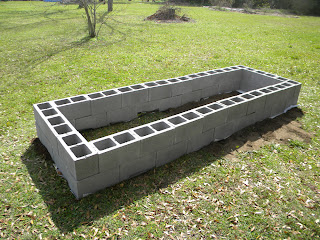 And now that the structure of the bed was complete, it was time to haul in some dirt! So I paid a visit over to Sunrise Garden Center, where last week I had spoken to one of the owners about what I needed to use to fill the bed. So this afternoon, I took him the inside dimensions of my bed (128" long x 32" wide x 16" deep) and he estimated exactly how much fill-dirt I would need. So I backed my truck up to the pile, and he and Brad Ward, a friend and former co-worker of mine, who works at the garden center as well, filled the bed of my truck up with dirt while I shopped for plants. I selected 4 different types of tomatoes, a Romaine lettuce, and 2 pots of marigolds (2 marigolds in each pot) to assist with bug protection. So once I was loaded up and purchased the dirt and plants (the dirt was $42, which isn't bad for an entire truck load), I headed back home, once again driving a truck that felt twice as heavy as normal lol. 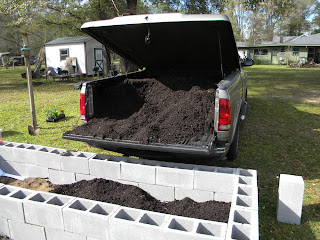 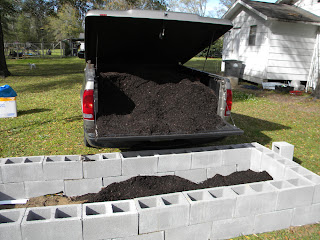 My poor truck lol. It'll take forever to get it clean again! So anyway, with the truck backed up to the structure, I used a garden rake to pull the dirt out of the truck and into the bed. And as I said, I had exactly the right amount of dirt for the bed. However, I didn't have enough dirt to fill in the holes along the rim as I had intended, so I'll just have to get more dirt later on to do that. Not only will having dirt in the holes add stability to the structure, it'll also give me 44 stationary "pots" to put plants in! 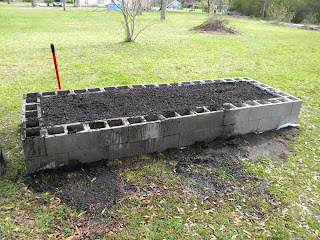 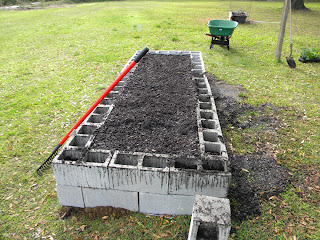 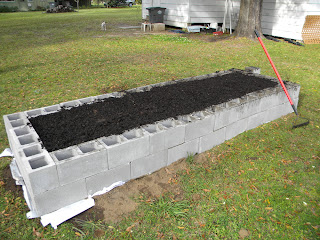 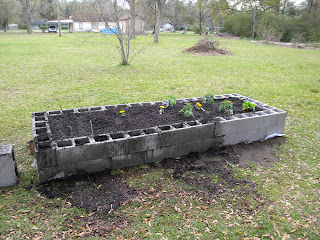 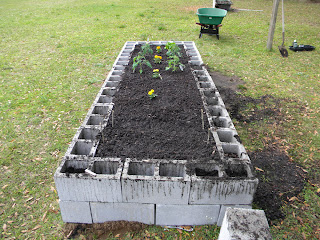 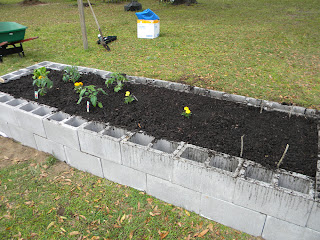 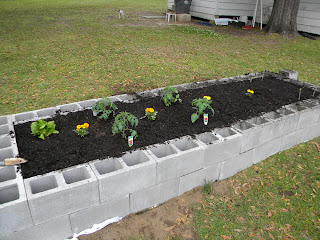 The four sticks on one end mark the 2 rows of carrot seeds I planted. They're multicolored, and will produce carrots that have roots of orange, red, yellow, purple, and white. I still have room in the bed for a few other plants; I just need to decide what I want to plant! And here are the closeups of the tomato and lettuce information cards: 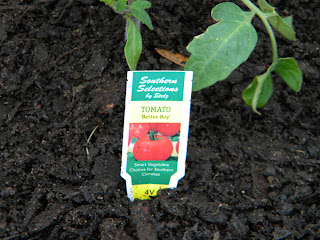 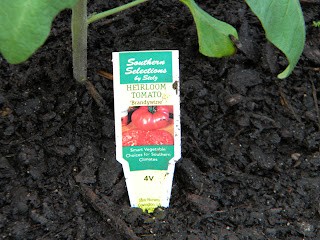 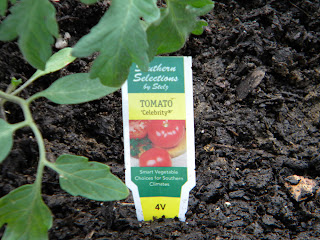 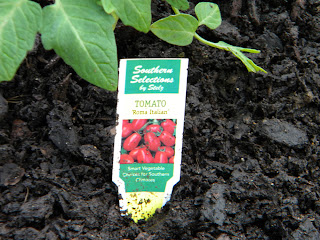 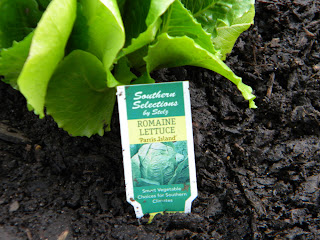 Updating this blog tonight has been very difficult; Blogspot has been having multiple user difficulties and I've had to jump around on 2 different browsers and almost start over dozens of times just to get this far. The text entry has been fine, but the image uploading and inserting has nearly driven me mad. It's literally taken 5 times longer than it should have to update this thing.

But in any case, grand total of my green thumb desires today: