A few little changes have been afoot out here at Booth's Little Farm! Among those changes are a new patch for my sweet corn, a potting table, and caps for some of the blocks in my raised bed. Another change that I have yet to photograph is that I finished up the raised bed by filling 36 of the 44 holes in the blocks with earth so that I can use them as planters - and also to add stability to the wall of the bed.

For starters, I dug out an area roughly 12' x 8' (I have yet to measure it to see exactly what the size is lol) for my corn patch. I dug out the sod initially and placed it around the perimeter of the patch so I could work out the soil from the sod later. During the digging, I came across much buried "treasure" - mostly broken glass and the rusted remains of tin cans. At one point, a large Victorian house graced the corner to the south of me (before my house was built), and my friend speculated that they probably threw their trash out in the back yard, far from the house yet within a short walking distance. So my land was most likely their backyard dump! That certainly explains all the trash I've dug up! I collected most of it in a plastic bin for disposal: 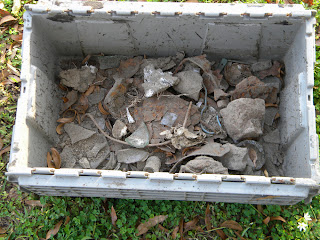 The noise a shovel makes when encounter subterranean glass is almost up there with fingernails on a chalkboard! A most unpleasant sound. :) Anyway, I started out with the basics for the patch: 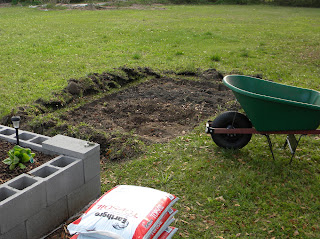 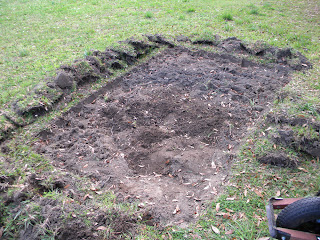 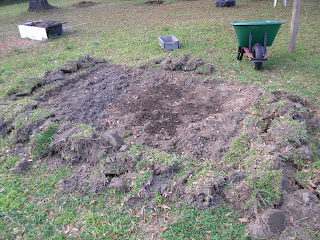 Once I had it roughly the size I wanted, I then set to taking each chunk of sod and painstakingly working the soil out of them and back into the patch. 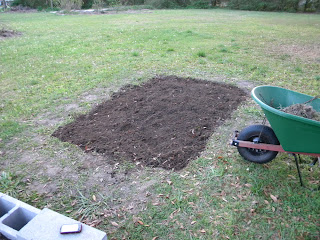 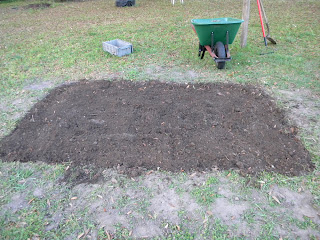 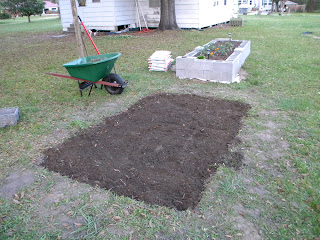 My tools for working this patch are rather primitive, I suppose. Or, more to the point, the tools aren't so much primitive as just requiring everything to be done by hand: 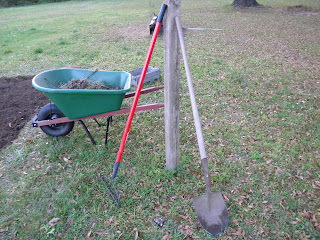 No tiller, no sod buster, just a generic shovel and garden rake! And, of course, the most basic of all tools: my bare hands. At one point when I was breaking up the sods by hand, the neighbor's daughter-in-law - "once-removed", whatever that means - came over to meet Max (my dog) and was gushing over how pretty he is, then looked at me and said, "You, however...." LOL. I was pretty filthy from head to toe. Took a lot of scrubbing in the shower later to get clean again! But, I've been enjoying living up to my name these days! ("George" means "Farmer". My full name means "The noble farmer who lives by the castle".)

So, once the sods were broken up and the soil ready, I used the handle of my rake to make 5 rows, and dropped 9 sweet corn seeds per row for a total of 45. It may still be too early for corn; I've heard you're not supposed to plant it until after Easter, but I used roughly half of what was in the packet; if this doesn't come up, I can replant in April. So now the patch looks like this: 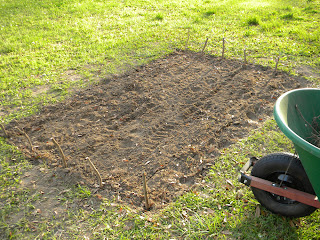 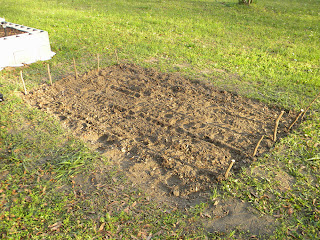 The sticks, actually roots I dug up while prepping the patch, mark the rows, since when I watered the patch, those rows virtually disappeared. My biggest concern now is the neighborhood dogs walking all over it and scattering the seeds when they do. But, since I finished yesterday, so far only a couple of tracks have been in it, and I smoothed those back over. Hopefully no seeds were scattered about from that one. Who knows what tonight will bring though? I may just have to invest in a short fence to put around it, as well as around the ones I'll be doing shortly for my sugar baby watermelons and my Hale's jumbo cantaloupes!

The caps on the raised bed add a certain flare to the whole thing, as does the filled-in holes made into planters. Unfortunately, I've yet to photograph the bed with the holes filled (just finished that today), but I'll get that image on the blog before too long. For now, here's a picture of the bed with the caps and the 2 solar lights I have burning on each end. 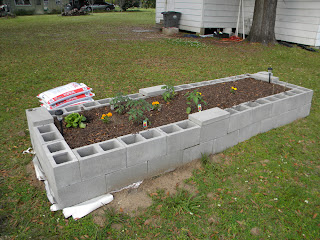 I also added 4 more tomatoes to the bed yesterday; smaller specimens picked up from Home Depot, a variety called "Early Girl". Supposed to start producing fruit 50 days after planting and continue producing until the first frost. We shall see if the 4 early girls live up with their descriptions or not! 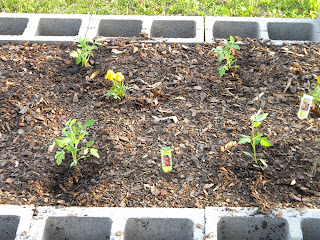 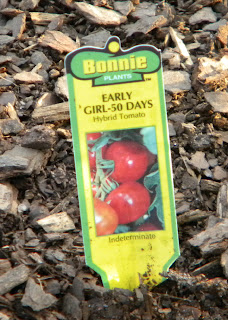 In addition, I also built myself a potting table. Talk about primitive! But it's functional and gets the job done lol. I built it by picking up the springs from a baby crib someone down the street had put out by the road. My idea what that a good potting table is made from hardware cloth, fencing, or something of the sort to allow soil to fall through and to allow for air circulation from top to bottom, so why not make a table out of the crib springs? So after dragging it back home, I took the leftover wood from the pallet I had pulled apart to make the compost bin, and used that as the legs. There were 3 long studs in the pallet, roughly 86" long, so I used a circular saw to cut 2 of the pieces in half. Which sort of worked; I actually managed to get the pieces uneven on my first try, so I had to shorten one of the legs, making the 43" legs I'd planned to use as 42.5" (half an inch makes a HUGE difference when trying to balance something like those springs on the legs!). I then, once the legs were a proper length, took the third stud and cut out 3 support beams for the legs. I then had to go buy a stud at Home Depot, because I was one stud too few lol. So, my very primitive potting table ends up looking like this: 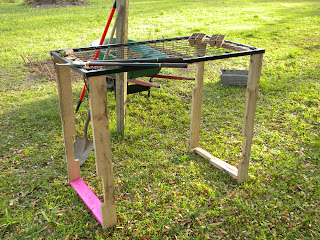 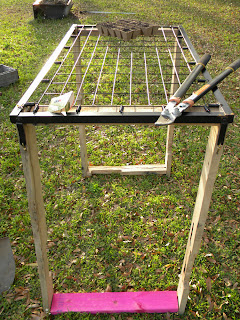 Primitive, but functional! It'll do for my needs at this time lol. I'm debating whether to paint it, or just leave it as is (although that purple/pink of the stud I bought it rather nauseating lol). You may also notice there are peat pots already laid out on the potting table. Two are shown; I added two more after these pictures were taken. The peat pots contain some very pretty purple zinnias that I want to put in my flower beds in the front yard. And maybe a few in the back as well. 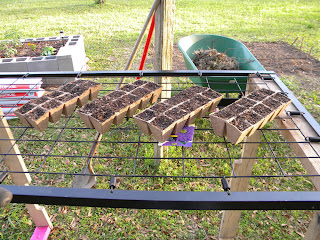 If these sprout and grow, I plan to go back and get some more flower seeds that I'd like to have. It's one thing to purchase a growing plant from a nursery (which is fine in and of itself), but it's quite another to have 40 flowers you grew from seed yourself!
Posted by George Booth at 8:17 PM