Ah, love working with my garden, and I managed to get some things done this evening that I've been wanting to do! What with it being too dark when I get home from work, or not being able to do some things because of a wound in my leg (for those not in the know, my dog, Max, and I were attacked by 3 dogs in my front yard three weeks ago yesterday. Max fortunately is fine now, after his neck wound healed, but I was bitten on the upper calf of my left leg, and it's taking forever to heal), or because of the weather (one week ago today, an EF-4 tornado ripped through Hattiesburg, so even though I had some time last Sunday, the weather definitely didn't cooperate!), I just haven't had a chance to get around to doing a lot of things I wanted to do. Well, this evening, my usual Sunday plans ended a bit earlier than usual, so I took advantage of that by gathering some tools together, and then dug out part of my raised garden bed, set that soil aside in a plastic tub, then took three 40-pound bags of cow manure and poured them into the trench I'd opened up in the raised bed. Then, I took a garden rake, and mixed it together with the remaining soil in the bed. 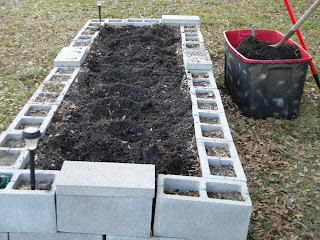 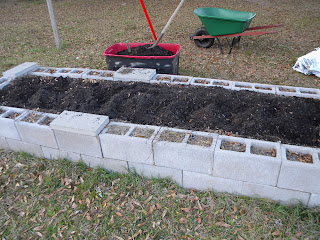 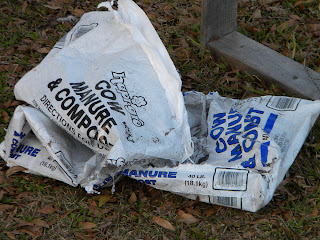 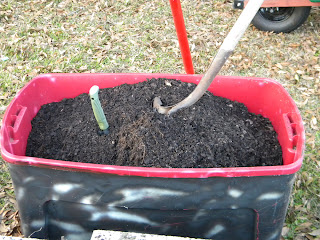 Then, I took the soil from the bin and spread it over the top of the newly-mixed manure and soil mixture, smoothing it out after it was put on. Hopefully, this first step will help in getting the fill soil of the bed fertile enough to raise some nice tomatoes, lettuce, and whatever else I decide to include in it. I plan to mix in some other fertilizers in the coming weeks before it's planting time. 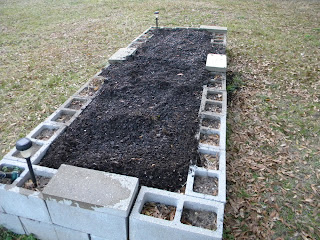 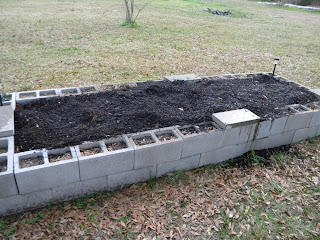 It already looks richer and more like growing soil after just stirring it up. For mixing it together, I used the hoe my sister gave to me for my last birthday, my garden rake, and of course the shovel for removing and readding the dirt. I also utilized the wheelbarrow my sister gave to me for my birthday the previous year. Hmm, I seem to rack up on outside tools on my birthdays! ;) 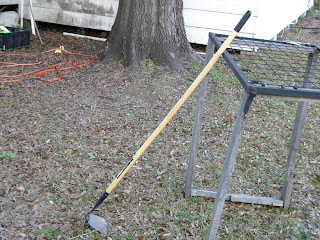 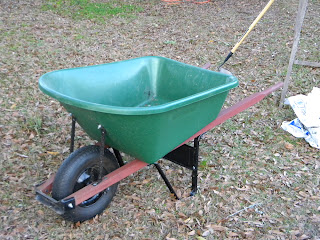 At some point, I want to add the contents of my compost bin, but I'm not sure at what point I should do that! Since I've been adding to it continuously, obviously not everything in it has composted at this point, although I think quite a bit of it has. Here's what it looks like after I stirred it up with my pitchfork this evening: 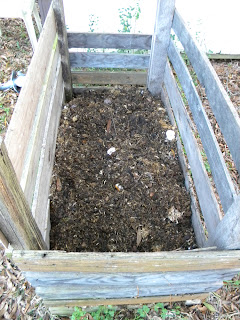 Also, last year, I had a huge problem with squirrels decimating not only my tomatoes, but my corn as well (I haven't started tilling up the soil for my corn patch yet). This year, I've searched for safe, humane ways to deal with the squirrels, since I couldn't really bring myself (even if I was a good shot) to shoot them, as many people in this area do. I considered live traps, but that would likely be a costly investment (I've no idea how much a live trap costs, but probably more than I'd care to spend). In my research, I've found that a lot of people like using fox urine pellets to chase small critters out of their yards. So, I did a search for some fox urine, and came across something called Shake Away Critter Repellent Granules that I'm hoping will do the job. It contains fox urine, among other ingredients. I've read several reviews on it, and while about 50% of the reviewers claim it doesn't work, the other half says it does work, but that you have to make sure you use it according to directions, and not just scatter it about willy-nilly. So I'm going to make sure I follow the directions to the letter to see if it'll get rid of the squirrels. Several of the positive reviewers also claimed it ridded their yards of moles as well, and that's something I'd really love to see gone, since I have several moles in my yard. I'll keep note of how it works in this blog! 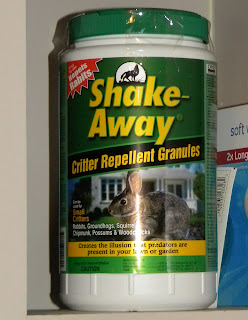 One thing that's definitely needed to do - find a place outside to store it, like in the storage shed. The smell is strong, even through the plastic bottle, and my dog loved sniffing it when I removed it from the box. I made sure to put it up where he can't get to it, as I'm sure he'd love to add his scent to it as well! In the picture, it was in a cupboard (with light bulbs and the like), but the storage shed is definitely the place for it!

On another note, I also finally got around to planting my Amaryllis in a flower pot, so I can keep it inside until after the frosts pass, before planting it outside. It had already started sprouting in the package! Talk about "life finding a way"! I also noticed that the strawberry I grew last year (which was highly disappointing, as it produced mostly small berries, and only 3-4 of them were even worth eating) is growing again, even though it's still winter. Granted, it's not been a cold winter, but we have had our cold days! I'm trying to decide if I'll just let it grow and see if the "second year's growth" produces better berries, or just dig it up and chunk it. I'll most likely just let it grow, though, and see what happens! 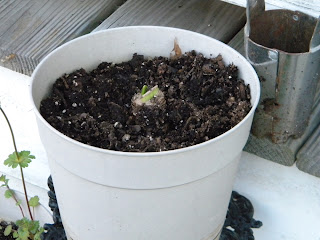 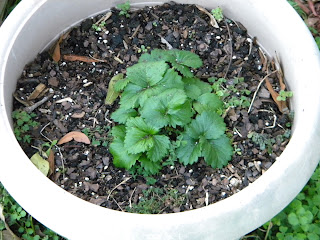 Anyway, until next time, happy gardening!