Once more, I find myself not updating my blog as much as I'd like, or should. It's been a month, I think, since my last update. Last time, I had mixed up the soil in my raised garden bed with some natural fertilizer (cow manure), had talked about putting out the squirrel repellent, and discussed my amaryllis and my strawberry plant. Time for some updates! But, first things first. I entitled this blog entry "Camellia", because that's what I ended up getting for my yard today. My friend and I went to Menge flea market in Pass Christian this morning, just for something exciting to do, and while there, I came across a lovely camellia tree/bush in a 3 gallon pot that I fell in love with. It was $20, and had a gorgeous bloom on it, white with pink stripes. 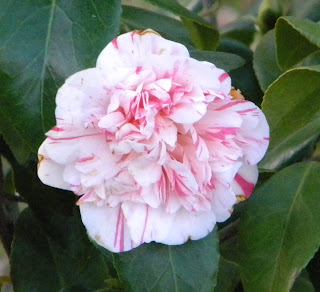 I balked at the $20 price tag, and decided to consider it. We walked around the rest of the flea market, then we went back to the beginning part of it to for him to purchase a pink angel trumpet bush that he wanted to put into a large concrete container. Then, we headed back to the booth that had the camellia, and I looked at it again, checking it out to make sure there was nothing wrong with it, that it was healthy, etc. etc. I then asked the guy running the booth if he would let it go for $15. He told me the plants were not his, that he was just helping to sell them, but that I could have it for $18. I pulled out $15, and my friend dug in his pockets and came up with $2 in ones; I held it out to the guy and told him $17 was all I had. He looked at the money for a moment, then said ok and took it. I then proudly carried my new camellia to my truck. Shortly after getting home, I then searched my front yard (I was determined it was to go in the front yard) for the perfect spot, then decided on an area near the property line to the south of my house, just in front of where the porch would be if it extended that far, and then dug the hole and planted it. 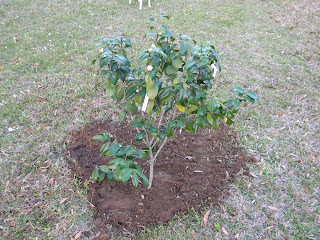 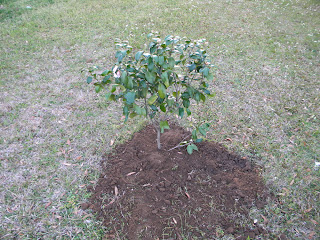 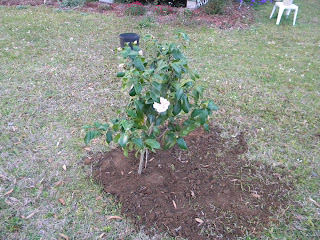 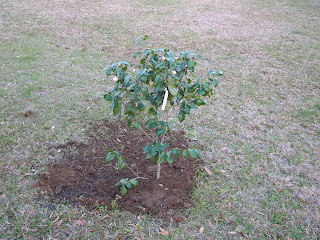 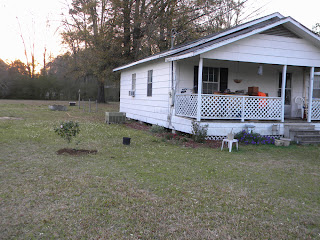 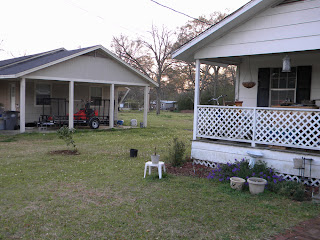 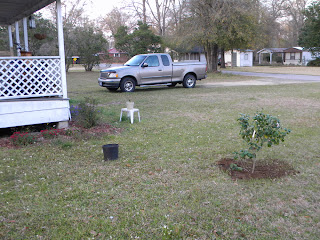 I made sure it had plenty of space for growing, and will be beautiful in that spot when it's gotten much larger. It also is in a spot where I can view it upon stepping out onto my porch without having to crane my neck too far to the right. :) I wasn't entirely sure of the variety; the label on the plant just says "Mrs Jimmy Davis Striped":

So, of course I had to Google it. :) And I found that this variety originated in 1961, in Hammond, Louisiana, by Walter F. Wilson, Jr., comes in both pink and white/pink striped, and that it has vigorous, open, and upright growth. Sounds good to me! I can't wait until it's a good six feet or taller and producing dozens of gorgeous blooms!

Now, as to the squirrel repellent, I've used the stuff a couple of times now, and while the squirrels are still here, they don't seem quite as nuisancy or stay in the yard as often as they used to. However, I don't know that the Shake-Away stuff, by itself, is going to solve my innumerable squirrel issues. I think I'm going to have to combine it with live trapping to move the squirrels away (either that, or buy a BB gun and start practicing shots on them up in the trees). There are more squirrel nests than I can count in all the trees in the backyard. They are going to have to be taken care of so I can have my chicken coops too, since the squirrels will eat all the chicken feed if I'm not careful. Moving on, in the last blog, I had posted that I had just planted my pink amaryllis in a pot to get it started while the weather was still unpredictable. Well, that little thing has finally started growing! 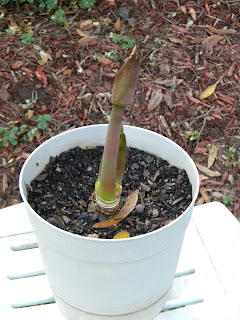 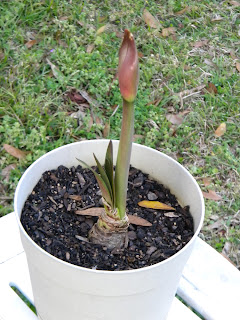 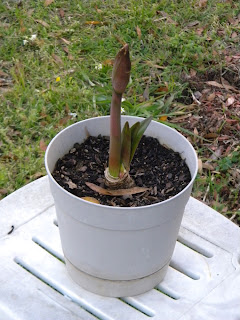 It's been rather vigorous over the last five days. On Monday, I plucked what I thought was a weed growing in the pot, about 2-3 inches from the bulb, and then was horrified to think that might have been the plant, growing from the bottom of the bulb or something (I have little to no experience with bulb plants at this point lol). I was assured by my friend that wasn't the case, and since Monday, the plant has gone from a very tiny green start on the top of the bulb to the size in the pictures above. And the bud is shaping up to give me what I hope will be a huge bloom! Speaking of blooms, my strawberry plant has 3 blooms on it! I'm guessing it actually prefers the cooler weather to the heat of the summer that I subjected it to last year, so who knows, maybe I will get some nice berries this time around! 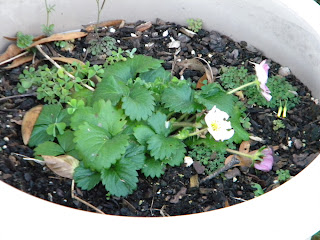 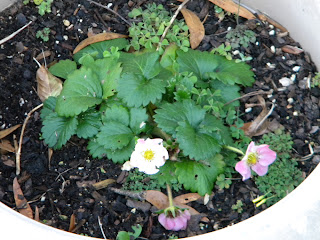 And, as it turns out, the strawberry isn't the only thing blooming around here! My purple verbena has just gone to town with blooms this year! It's nearly taken over the flower bed it occupies, which is fine; when the yellow lantana starts growing again (assuming it does), it'll be intermixed with the verbena, to give a very nice purple and yellow/gold show! One would think I'm an LSU fan lol! 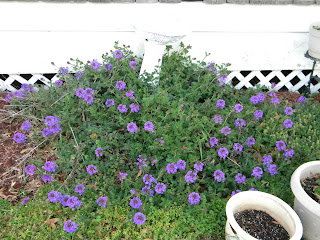 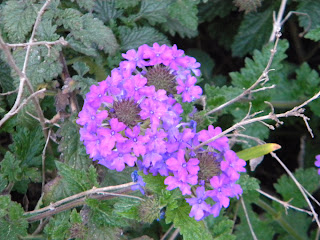 Of course, my camera didn't capture the true dark purple of the blooms. It comes close in the top picture, but the blooms pictured on the bottom are a very, very pale version of the true color. In that same bed, I also have lemon thyme which, while of course not blooming, is doing very well in it's third year of growth: 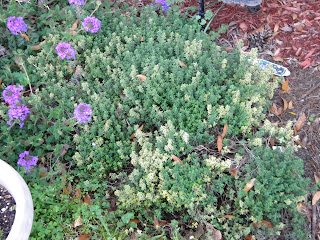 On the other side of the steps, my coral bells azalea has been producing some blooms, although the frost killed off some of the blooms earlier this past week. And then, there is my rosebush, which I pruned last month and which has already sprouted some vigorous growth of its own. 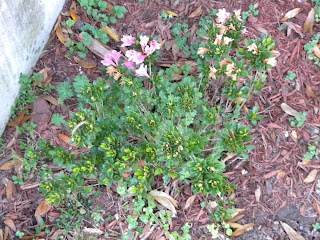 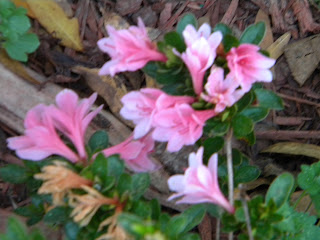 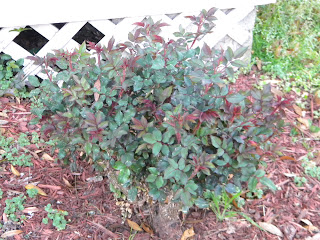 My dianthus has also been blooming pretty well, the solid colors more prolifically than the striped ones: 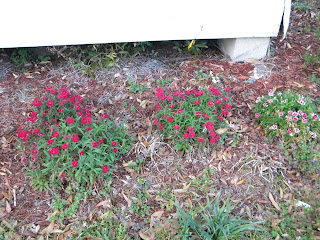 Now, back to the raised bed. It's still sitting there with nothing in it for the time being. I've been waiting until I know the danger of frost is passed to start setting out anything, but I also need to go ahead and start my tomato seeds. I have a packet of yellow pear tomatoes that I wanted to try this year, and of course I'll get plants again from town (maybe even from the Hattiesburg equivalent of a co-op that I discovered on the 42 Bypass) when I'm ready to set them out. My poor raised bed is looking lonely! 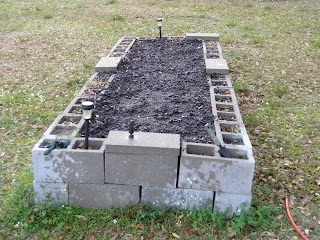 And that's pretty much it this time around! I'll leave the blog with three images of my cat, Maverick, checking out the new camellia tree: 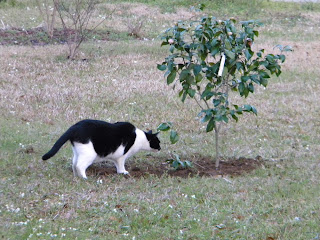 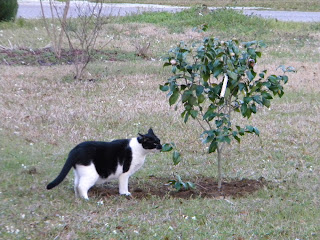 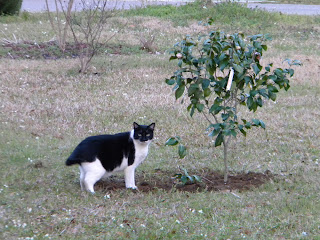